11 March 2018 – I gassed up, ate a light bite, and asked where ATMs were. I found out where they were. The first ATM didn’t accept my card and the second one did. I was happy about that. I needed a better supply of Argentine Pesos. A man came up to me speaking Spanish, something I totally didn’t understand. Something about Police / Policia and Hwy 3 to Ushuaia, exactly where I was headed. Then he left.


I went and made my withdrawal from the ATM. Blanche directed me out of town and can you believe it right past this guy’s house. He asked me to wait. He ran over to his garage and got his motorcycle out. It didn’t start too well. Obviously it had been sitting too long to just start up. While I was waiting for him to get his motorcycle started an older lady came out of her house and wanted her picture taken with me. She really liked me for some reason. Her daughter took the picture. After the picture taking season, the man with his motorcycle guided me through the back streets to Highway 3 to Ushuaia. Apparently by doing this, I avoided all the road construction and the police. He told me what road to take after the scenic route and Blanche bought into his route. We were off. I thanked him immensely for his help and left smiling.


I was on Hwy 3 out of Caleta Olivia. The road was great the first half of the trip. The second half of the day the black top roads were rutted up from the heavy semi-truck use. I saw many llamas and emus. I saw an adult male llama jump a five foot fence and female and her young llama clear a three foot fence easily. I was amazed. I frequently encountered the Emus and Llamas walking on the road. You have to watch out for them just like Wisconsin and Minnesota deer. It could be pretty scary at times.


The scenery was mostly flat desert and worn down mountains.  The Andes are a really old mountain range. Plenty of shrub brush. I didn’t have any real wind problems, mostly a slight cross wind which wasn’t any worse than riding across South Dakota.


I called it quits for day and stayed the night in Puerto San Julian. I didn’t make it to Puerto San Cruz or Rio Gallegos. That was a letdown. The first hotel I stopped at was too expensive, so I left. The second hotel didn’t have any secure parking, so I left. The third hotel was recommended by the receptionist in the second hotel. I had huge communication problem with the staff, so I left.  On the way over to the 4th hotel, a dog ran out and bit me in the knee of my riding suite. He chomped into the knee pad and no harm done. However, had I been able to get off that motorcycle and with a stick in my hand I would have beat that dog senseless. No dog that takes a chomp out of me and gets away with it. He wouldn’t make that mistake again. 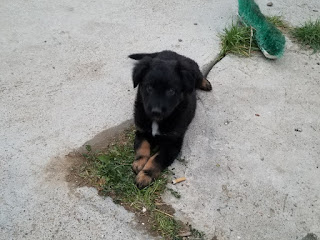 At the 4th hotel I paid $600 Pesos and gave them my passport, and check in was done in 5 minutes. My kind of hotel with secure parking. I found a buddy while unloading my motorcycle. A little black puppy who wanted to play. We had a lot of fun for a while. I didn’t want to tell the little fella he had a rough life ahead of him. That’s a statement based on dogs in general in Mexico, Central America and South America. I went to bed hoping I’d see the little hound again.
Posted by Beauty at 8:15 AM