15 January 2018 – Today was a big day and I rose about 6:00 a.m., ate some breakfast, made sure I had water to take along with me, loaded my bike per my instructions, made sure Leanardo was on board with my pickup plans, made sure the receptionist understood they must dispatch Leanardo to pick me up when I call the hotel, and departed about 8:00 a.m. My idea to get on the autopista and go through the roundabout was a great time saver. The traffic was mild and moving. I followed Blanche’s directions to a tee and she delivered my motorcycle and me right to the Air Cargo Pack. I always laugh at how nice all the roads look on Google Maps and then when you drive them they are totally different.

I parked my motorcycle and grabbed my paperwork. I went into the terminal and asked for Leivy. I was looking for a guy and it turns out Leivy was a woman. I was surprised because all this time I thought she was man. Well, blow me down. Anyway, she asked if I went through Customs and I said no. She said you have to go through Customs. I said I was told Air Cargo Pack handled all the paperwork. She said I had to go back to Customs / Aduana and get my papers processed. So, I did. There were four windows. So, which one do I pick? I see this guy and he points to a window so I go there. I give my paperwork to her and she doesn’t know what to do with it. I give her my passport and she doesn’t want it. She stamps my paperwork and gives it back. She’s still was acting weird as I walk away.

I take my paperwork back to the Cargo Terminal and Leivy said to me that most of the paperwork she needed was missing. I said that’s all the woman gave me. So, she says, you come with me and off we go back to Customs / Aduana. She went to another window, hands in all my paperwork to the woman inside. The woman inside says I can’t find his paperwork online. I told Leivy the Wi-Fi was down at the border so they hand wrote out the paper I have. So, the woman inside had to re-enter all my information. This probably took 30 minutes and all the correct paperwork was returned to Leivy when she completed it. We were good to go. I noticed the people at the window that stamped my paperwork the first time were all missing when Leivy and I returned. I think they knew I would have to return a second time to get my paperwork done correctly and all they did was send this loco gringo on a wild goose chase and sat back and laughed about it. I guess I’ll never know for sure. So back to the Cargo Terminal we go. 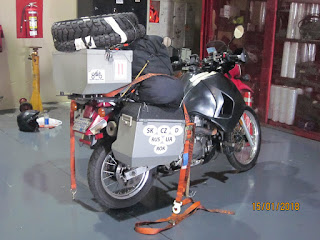 I roll my motorcycle into the terminal and tell the guys there how I’d like it anchored during shipping. They showed me the straps they used, and the pallet it would sit on. My plans wouldn’t work so we sat down to figure out a way to anchor it that worked for them. I didn’t want any straps pulling or putting pressure on the gas tank or on the saddle bags. I didn’t want the bike tipping over either, and I showed them how that can happen. I showed them how I used a stick under the right-side foot peg to keep it from falling over to the right. I battened down all the hatches and left the motorcycle to them. I signed all the paperwork Leivy wanted me to sign and paid the shipping charges. My part of the shipping process to Bogota, Columbia was done. 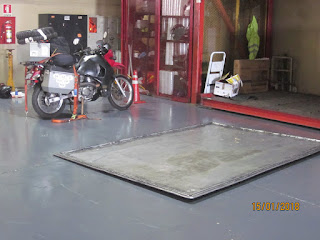 Leivy called the hotel for me and they dispatched Leanardo over to the Air Cargo Pack Cargo Terminal. After everything was done I was arranging my copies of the shipping documents and for no apparent reason, I get a bloody nose. Before I could run down some toilet paper to shove up my nose the nose bleed stopped. Luckily, I didn’t destroy all my paperwork. I finished arranging my copies and Leanardo arrives. I grabbed all my papers, thanked Leivy for her help and we departed back to the hotel. Tomorrow my bike ships to Bogota, Columbia.

We got back to the hotel and I had a little time to kill so I walked over to the Metro Mall and walked around. I thought I would see something that was interesting, but I didn’t.  It was just a mall.  I stopped in Dairy Queen and purchased a Strawberry Cheesequake Blizzard. It’s a favorite of mine back home.  I then left the mall, but it was so close I came back later sometime around 6:00 p.m. and ate lunch / supper at Burger King. I was looking for napkins when a lady recognized I was an American and asked me what I was looking for.  I told her napkins. She barked something out to one of the order takers and I promptly received some napkins. I talked to her for a bit and she told me she lived in Miami for 30 years and was down in Panama looking after her aging mother. She was born, raised and educated in Panama and moved to Miami when she was 23 years old. She said she was now 56 years old and running a small import business. She imports Panamanian arts and crafts into the U.S.A. Whoever she was waiting for eventually arrived and I excused myself because they had plans.

I went back to the hotel to get ready for tomorrow’s flight to Bogota. I was able to print out my ticket ahead of time, which made me much happier. I could just show it at the Avianca Airlines check-in counter and there should be very little need for conversation.  With that, I went up to my room and retired for the night.
Posted by Beauty at 8:55 AM