3 January 2018 – My alarm went off at 4:30 in the morning. I wanted to get an early start at the border. The hotel was still asleep and I didn’t know if the front door was locked. I walked out in the hall to check and the doors were locked with the night watchman sitting in front of the doors. Good, I can start loading my motorcycle! I removed the cover off my motorcycle and rolled it out where I could load it and squeeze out between the parked cars.

I was off by 6:30 a.m. heading for the border. I had 15 miles / 24 Kilometers to get to the border, about a 30-minute drive. I was about a mile from the Nicaraguan border and despite the fact that I’m there early, the semi-trucks are already backed up 5/8 of a Mile / 1 Kilometer. I can already see the tour buses setting in the parking lots with hundreds of people milling around. I thought to myself that it could be a long day.

I stopped short of Customs and Immigration and removed my paper work from my top box. While I was doing that my helper showed up. We agreed on a price and he set about managing my paperwork. I paid 50 cents for someone one to watch my motorcycle. My helper and I headed toward Customs and Immigration. He asked for 500 Nicaraguan Lempira ($21 US). I asked him what he needed that for and he said, “to speed up the paperwork.” I went and stood in line at Immigration and got my passport stamped. There was some kind of fee for that. He got at a $2 USD gratuity for that because he didn’t have the correct change for a $20 USD bill I gave him, or said he didn’t. When I was finished there, all the paper work was completed on my motorcycle. No checks on the VIN Numbers. Just drive through two check points: one person gets a small piece of paper and the other checks that my paper was stamped correctly. All within less than 45 minutes.

At this time I was introduced to my next helper who would get me through Customs and immigrations on the Costa Rican Border. We agreed on a price but before I left I changed my Nicaraguan Lempira currency in to Costa Rican Colon currency. I think I got taken for a ride there, but I road through both check points successfully. When I reached Costa Rica I gave my helper all the copies he would need for his job. I went through Immigration and he set about pushing my paperwork through the Customs Bureaucracy. The women who helped me spoke English, which was helpful. She had a problem swiping my passport through her scanner. I told her they swiped my passport in Nicaragua Immigration and it worked ok. She asked where I was staying and I gave her the hotel address. By the time I finished, I had to sign some forms and get some forms filled out and signed. Then it was off to purchase Insurance. That cost me $32 USD. With all the forms signed and money paid I had to go through two more check points. Someone checked my passport and another checked my insurance and passport. I was done in about 1-1/2 hours and free to go. Hurrah!!!!

I punched in the coordinates for the Hotel in Liberia, Costa Rica, which I was planning to stay at. I arrived right on its doorstep. Blanche did a fine job of navigating. Right across the street was McDonald’s. I parked in their lot and walked 100 Yards / 100 Meters to the bank and purchased more Costa Rica Colon. I goofed up on the decimal and thought I had more money than I had. Anyway, I went back to McDonald’s and ordered lunch. After I finished eating it I Skyped Mary. We talked some but the Wi-Fi signal was weak and she kept fading in and out. So we hung up with hopes of better Wi-Fi tonight. I got on my bike and went back to the bank and withdrew $100 in Cost Rican Colon.  Now off to the hotel. 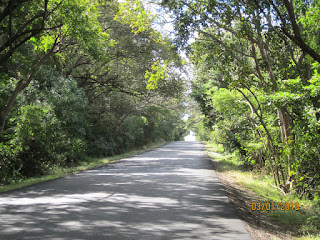 I was back on my bike heading toward Alajuela, Costa Rica about 125 miles / 200 Kilometers away, an easy drive in 5 hours. I rode some very nice roads until we entered the mountains and then it was switchbacks and slow traffic 30 to 40 Mph / 48 to 65 Kph. I eventually broke free of the mountains when I neared Alajuela. Blanche was navigating and doing a good job. We exited off the Autopista into the city to the Airport Hotel. Eventually we came to dead end. No road to follow anymore. It was gone. 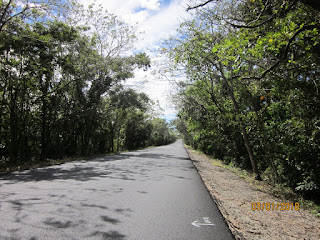 So, I took Blanche past the hotel where she could bring me in another direction. Then she found the hotel, but took me to the back side of it. I was thinking the hotel was out of business. It has happened to me before. I asked, a husband and wife walking along side the road if the hotel went out of business. They said, no, follow this road and bear left and you will come to this road. Sure enough, there was a road right alongside the Autopista which to took me to the Airport hotel.

I arrived at the gate and I had a bad feeling about the place. The guard asked if I had a reservation. He finally let me through with a pass. I drove up to reception and asked if they had a room. The receptionist spoke very good English, thank God for that. I asked if he had a room for the night. He asked if I had a reservation. I said I didn’t, and he told me they were booked up, no rooms available. Everything this guy was saying sounded very phony to me, like he was lying to me. He told me to go online find a hotel and book it. I told him I couldn’t because my cell phone was broken. I said that I looked for this hotel for over an hour, and can’t I please stay? He said they were booked up. He told me I could use his computers to find a hotel to stay at. I thought for sure I would be sleeping outside tonight. I told him I would check my motorcycle for hotels. I had Blanche check for hotels. Guess what popped up? The Marriott Courtyard. I told Blanche take me there.

After a bunch of staggering around I eventually got back on the Autopista. It’s not as easy as you think. I had to get on going west, then get off and go through several roundabouts and get back on going east. I drove 2 Miles / 3-1/2 Kilometers of stop and go traffic. I eventually got to the Marriott exit and made my way to the hotel. I parked my bike and security comes over and tells me to move my motorcycle. It’s only for car parking. I asked if I could park for 10 minutes while I check on a room for the night. He was ok with that. I went inside and checked on a room. The have a room and I booked it for the night. Whew, what luck. I have a place with the internet and a place with secure parking. When I was done with registration, I went outside and thanked the security guard for letting me park until I got registered and then moved my motorcycle to the hotel parking lot behind the building.

I enlisted the help of a porter to move my bags from my motorcycle to my room. He was a friendly chap who could speak really good English. I was still having this problem with my cell phone. Man, what am I going to do about that?  Even though I got my first smartphone just a few months before I left for my trip and navigated around the world without one in 2009, I’ve gotten so used to using it on this trip that I can’t live without it anymore.

I got myself all settled in my room, got out my computer and hooked up with the Courtyard’s Wi-Fi. It has a good strong signal. I sent Mary an e-mail hoping she can help me unlock my cell phone. She replied back quite quickly. We both worked together trying to unlock the phone. We didn’t have any success. We both went to bed stumped by the problem. The phone worked well in McDonalds in Liberia, Costa Rica. In between Liberia and Alajuela, Costa Rica the phone locked up for an unknown reason. Before I went to bed, I asked about washing clothes and Marriott provided a complementary washer and a dryer but you have to purchase the soap. First thing tomorrow is wash clothes. I know my shirt hasn’t been washed in three weeks.
Posted by Beauty at 10:50 AM