11 January 2018 – I found out the hotel I was staying had a good strong wi-fi signal so I decided it’s time to send out some e-mails to Air Cargo Pack to see if I can get a reply back on shipping my motorcycle. I had prior copies of my e-mails which I included in my first e-mail I sent them. Much to my surprise, I had a return e-mail from them and was hoping for the best. I opened the e-mail and my heart sank. It basically said the person I was dealing with either no longer worked for the company, or was taking a family related leave of absence from the company. So, what do I do now? I went to the Air Cargo Pack website looking for the company contact information. I gathered all my information and was going to type up an e-mail requesting a quote to ship my motorcycle. Another new e-mail popped up, and low and behold, the prior e-mail was forwarded to an individual who had replaced the absent person. It basically said I have a flight leaving tomorrow 12 January 2018 at 3:00 p.m. Drop your bike off at 8:00 a.m. in the morning of the 12 January 2018. She gave me the address of the Air Cargo Terminal in Panama City, Panama. According to my rough figuring I was still two days out of Panama City. After a little thinking, I e-mailed Leivy (a female name) back. I assumed Leivy was a guy’s name. I told her that when I arrived in Panama City I would like to do some sightseeing / tourista stuff, and asked what other flights they have January 13th, 14th 15th, 16th, 17th, 18th, and 19th. She replied back that she had a flight leaving on the 16th at 11 a.m. and to deliver the motorcycle to the air cargo terminal by 3:00 p.m. on the 15 January 2018. I still was unsure if I could make that date and still do some sightseeing in Panama City. So I e-mailed her back asked if she had any flights leaving on the 17th, 18th, or the 19th. She replied back that she wouldn’t know until Monday 15 January 2018. At this point I was pretty happy with my findings. I told her I would get back to her on the 16 January 2018 ship date and she would let me know about any possibility of shipping on the 17th, 18th, or 19th. No matter what, I had a ship date on 16 January 2018. I would have to see how that all matches up with my travel and sightseeing plans. 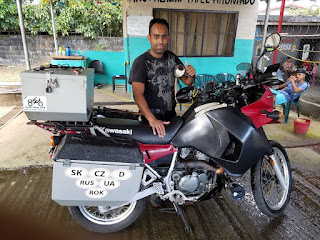 I’m getting pretty hungry so it’s time to find a Grocery Store / Mercado for some apples, bananas, bread and Snickers candy bars. When I opened the hotel door there sat a Harley-Davidson Dyna Wide Glide. While I was e-mailing back and forth I thought I had heard one. Anyway, I found a super store within 400 Yards / 400 Meters. I walked there and on the way I spotted a car wash. I stopped by and asked if they washed motorcycles. They said yes and it cost $3.00 Dollars. I told them I would be back. I don’t think they believed me. I continued on to the Grocery Store / Mercado. It was a big store. I hunted up the likely suspects and in my tour of the store I spotted some ice cream. I thought “what the heck?” I need some fat on my bones. I’m going to purchase 1 pint / 473 ML. Just enough that I can eat it all in one sitting. On the way back to the hotel I spotted an ATM. When I get done eating my ice cream I will purchase some more U. S. Dollars. I may have not mentioned it but Panama uses U.S. Dollars as their currency. It’s nice to be using a familiar currency. I finished up eating my ice cream. I felt a little piggish but I need some fat reserves. My hip bones are sticking out and I haven’t seen them in 10 years. 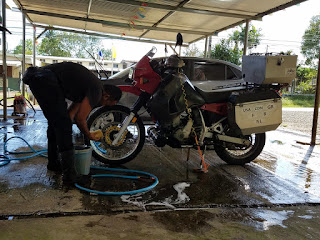 I got to thinking I’m going to take my motorcycle down and get it washed. I pulled into the car wash and all the guys gave me a look like “what does this dude want?” I asked if they would wash my motorcycle and they said, yes. The price is $3.00 Dollars. I said, ok no problem. So off they went washing my motorcycle. Actually, just one guy washed my motorcycle and I just waited. He was having some trouble washing my wheels and spokes. So, we put it up on the center stand. It takes two people to put it on the center stand because of the weight of the bike. Now he can spin the wheels to clean them. After an hour of washing he had it pretty much cleaned. It looked 95 per cent better than when I brought it in. I paid the guy and gave him one of my blog cards. I showed him how to look it up on his cell and we both pushed my bike off the center stand. I was off to the hotel.

When I got back I covered it up and I was off to the ATM to shore up my cash reserves. Some of those ATM’s can be a little tricky and this was one of them. Sometimes the English translation doesn’t come through so clear. Anyway, I did get my $200 Dollars I wanted and I was good to go. Back at the hotel I put the GPS Coordinates for the hotel in Panama City, Panama into Blanche so she would be ready for tomorrow. I will be staying at the Courtyard by Marriott. As a rough estimate, I think I am about 250 Miles / 400 Kilometers away from the city. I was unsure I could make it all the way into the city without another hotel stop because of all the mountain driving. That really slows you down. If that was the case, I would stop 62 Miles / 100 Kilometers out and then drive the rest of the way into the Panama City the next day. So, for the record if it was slow going I would stop in La Chorrera and stay the night and if I could make good time I would continue driving into Panama City. I went to bed figuring to rise about 5:00 a.m. and be on the road by 6:00 / 6:30 a.m. just about sun up.
Posted by Beauty at 6:51 AM