Preparations for Crossing From Nicaragua into Costa Rica – 31 December 2017 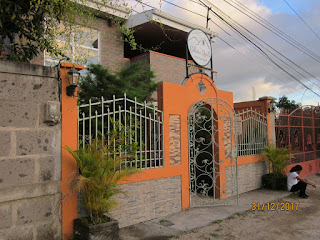 31 December 2017 – I found a supermarket / mercado and decided to do some shopping before I leave. I picked up some apples, bananas and my old reliable Snickers bars. Talk about a bad day to shop. It took me probably 10 minutes to find my food. Then I stood in line 45 minutes to get checked out. Since I had been battling a little cold, while I was shopping for bananas I asked the lady next to me if there was a pharmacy in the store. She answered me in English. I asked her if she spoke English and she said yes. She said, she and her husband are from the U.S. I asked where and she said they were from New Orleans, Louisiana. I told her I was from St. Paul / Minneapolis, Minnesota. It amazes me that I have run into so many North Americans on this trip.  It is so different than the trip around the world I took in 2009. 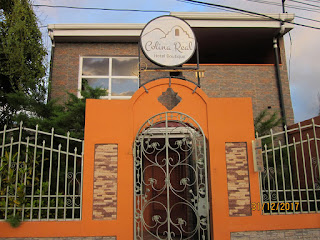 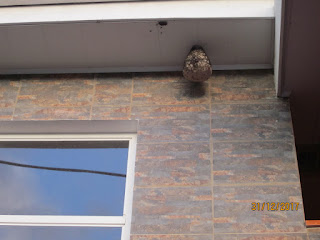 There was a bee's nest hanging from the soffit of the hotel.  I was told it is a sign of good luck, and they are never taken down until they fall down on their own. 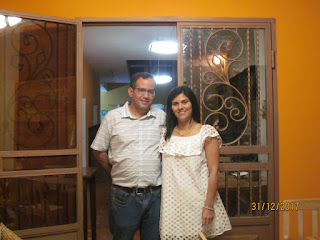 I came back and wrote up the list of cities I should be passing through on the way to the border and taped it to the gas tank. I also wrote down all the way points and taped them to the gas tank. That’s just a precautionary measure in case Blanche rebels and doesn’t follow my pre-programmed route. I took some picture of the hotel. The hotel staff here are very friendly and helpful. We communicated mostly with my cell phone translator. They cooked me breakfast and supper every night. That was nice. I’m sure if I could have spoken some Spanish I could have had an interesting conversation with these people. The boss lady Fatima is 31 years old and her husband Mario can’t be over 35. I plan to be rolling by 6:00 / 6:30 a.m. tomorrow. So, I have to get my stuff wrapped up so I can slide out the door nice and smooth tomorrow morning. Mary told me they have been having a cold snap in Prior Lake MN where we live. I’m showing on my cell phone that it is -13 below zero Fahrenheit / -25 Celsius.