10 January 2018 – I got up around 5:00 a.m. to get an early start. True to form, truck traffic starts picking up about 4:30 a.m. and they use their jake brake all the way through town through every gear. They are the equivalent to the roosters in the morning. When I heard the first two or three I knew what time it was. I still needed to pack my rain suit closer to the top of my black top bag. I got my system pretty much figured out. To get at my rain suit, I still will have to move the spare tires I have bungeed on the top of my bag, but when I unzip the bag the rain suit will be right on top where I can easily pull it out.

With that done, I loaded my motorcycle and departed for the Costa Rica Border. It was pretty much an uneventful ride. As the truck traffic started backing up, I knew I was within 400 Yards / 400 meters of the border. I slowed down and started looking for Aduana / Customs and Immigration. I saw a motorcycle backed up against the curb. He motioned to me to park next to him. I hooked a U-turn and backed my bike next to his. I asked him where he was from, he said, he was from New Zealand and his name was Chris. We shook hands and he was off to start processing out of Costa Rica. We made about 4 stops and were easily processed out. It took less than 30 minutes and we were free to leave Costa Rica. There was no running from one building to the next. Everything was very close together and the fees were small. Most of the Customs and Immigration people spoke enough English so that paperwork moved pretty smoothly. No helper was required for this exit. That exit was not painful. I gathered up my papers and departed for Panama. 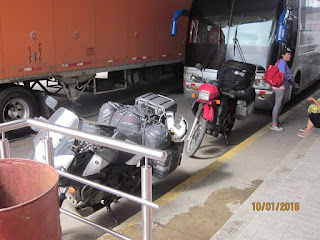 Chris had already departed and I parked behind him in Panamanian Aduana / Custom and Immigration. I was approached by a helper and I decided to use his services. However, $5.00 was the maximum I was going to pay because of how easy the entry into Panama was. He agreed that would be fine. First, we needed insurance, then about 3 or 4 more stops. Both Chris and I were at the Aduana / Customs window when the wi-fi / internet went down. I guess this is quite typical. I actually had my motorcycle paperwork filled out on line but there was a mistake on the color of it. They had written the color of the paper as WHITE. You can’t have a mistake like that. So, Chris and I were caught in a time warp of the days before the internet. 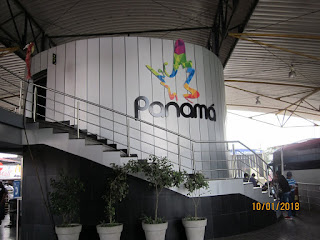 We stood and waited and waited. I waited about 2 hours and Chris slightly less. The wait got so long I cut my helper free because I really didn’t require his help anymore. I guess they figured the internet would come back up and they could make the correction online and print out my import papers. Well, that didn’t happen and they processed my motorcycle import papers the old fashion way by filling them out by hand. During the wait, a tour bus lady approached me and asked if I could move my motorcycle because the bus couldn’t get out. The driver pulled up to within 2 feet / 1/2 a meter of the back of my motorcycle and parked. The bus behind him was parked so close he couldn’t back up to get more front clearance. So he was stuck. I moved my motorcycle, opening up a space so he could get out. Everybody was happy. I just thought of something: those tourist buses are well known for being aggressive and pushy out on the highway, and I mean pushy. I have more than once been on the receiving end of that behavior and if I was a vindictive individual I could have left my motorcycle sitting there blocking in that bus for another 30 minutes just to pay those dudes back. I didn’t: life is too short for that kind of crap. 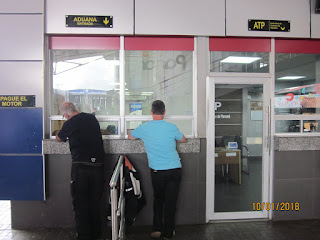 I was finished with Aduana / Customs and my next stop was fumigation. It cost a dollar and they sprayed the wheels to kill traveling insects or bugs. It took 20 minutes of waiting in line to get the paperwork filled out. I found a mistake on the form; I questioned them about it and they blew me off. They said to leave, it doesn’t make any difference. I also got told to move my bike because it was parked incorrectly. I guess in the big scheme of things, if the paperwork was incorrect on fumigation the world would not stop turning. I got all my paperwork put together back up and departed through the truck fumigation booth. I thought the both was manually operated but it was automatic. My whole bike and I were sprayed down. As soon as those sprayers turned on, I was on the gas and out of there. I was mad and thoroughly ticked off. Thank God none of that spray got in my face. I can imagine when the Panama fumigators saw that they died laughing at the loco gringo.

Chris and I hooked up again about 100 yards / 100 meters down the road. It was a bad parking spot so we agreed that when we find a better parking spot we’d stop and chat it up some. In less than 1 Mile / 2 Kilometers there was a gas station with a food mart. We stopped there. I immediately found the latrine and washed my face and the face shield on my helmet. I didn’t know what effect that fumigation spray would have me or on the plastic face shield. Well, it didn’t look like it affected me or the face shield at all. I was kind of dehydrated so I needed to get some water and food. I was starving. I bought two liters of water, some fried chicken, French fries and Snickers candy bars. I drank one liter of water and ate all my food. I started feeling human again, and Chris and I talked travels and how we were going to ship our motorcycles to Columbia. I told him I was going to ship my motorcycle by air to Bogota, Columbia. He said he was going to do the same. He said he was having difficulty hooking up with his shipper so I gave him my information on Air Pack Cargo. That way if his plans fell through he could always check out Air Cargo Pack as a backup. We both filled up with gas and parted ways, wishing each other safe travels.

I was driving to the City of David to a hotel there. It was a short distance of maybe 45 Miles / 70 Kilometers. It was a new four lane highway all the way there. I was on the gas and kick’n butt. I haven’t driven at 62 Mph / 100 Kph in so long I thought I was driving 80 Mph / 130 Kph. Well, I had slowed down some coming into a town, and Bang-o! I was stopped by the Policia. They had me at 43 Mph / 77 Kph. The speed limit was 31 Mph / 50 Kph. The lady police officer showed me my speed on her radar gun. When I looked at it 43 Mph / 77 Kph. When she realized I didn’t speak Spanish and was an American she just waved me off. I breathed a sigh of relief. A little lesson was learned here. The Panamanian Police do not allow speeding, ever. If you’re caught, you pay a fine. Except in this case, for this gringo. I’m a quick study when it comes to that. Here’s what I learned: 50 Mph / 80 Kph is the maximum speed in Panama. At the outskirts of the city it will change to 31 Mph / 50 Kph so you slow down. In 300 meters there will be a motorcycle police officer with a radar gun. Sometimes I saw the speed limit at 62 Mph / 100 Kph,but this was rare.

I made it to my hotel safely and checked in. I got my perfect room; ground level, my motorcycle 2 Yards/ 2 Meters from my door, and good security. I unloaded my bike and reveled in the fact that I had reached a milestone in my journey to South America. I had reached Panama. Now I had to reach Panama City and start the process of contacting my shipper about flying my motorcycle to Bogota, Columbia. I was just going to take a break tonight.
Posted by Beauty at 6:48 AM