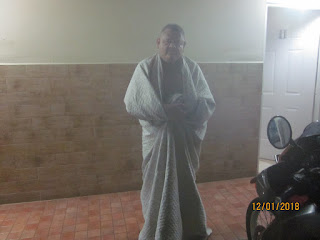 12 January 2018 – Oh that 5:00 a.m. comes hard when you don’t want to get out of bed. I mobilized myself enough to look out the door and saw that one of the hotel patrons had backed his car up tight against my motorcycle and there is no way I can get out. I hardly could get my cover off he was so close. At the time I didn’t notice but he also blocked in a truck. Well, I couldn’t be slowed by this so I took off my cover and rolled my motorcycle forward to the curb. I then could walk around behind my motorcycle. I continued loading it hoping the dude would show up and move his car. I was putting the finishing touches on loading my bike when the Harley Rider hears me making rustling noise with my bags and footsteps. He walks out of his room with his blanket wrapped around himself. He looked like Yoda from Star Wars, just a larger version. I’m sure like me, he was thinking somebody was messing with his bike and he came out to investigate. I of course, was complaining to him about the dude who blocked me in. I wanted to get going. The Harley Rider gives my motorcycle a really good looking over and told me he liked it. I told him about the disadvantage of the wide saddle bags. You can’t split lanes with it without the possibility of rubbing the cars next to you. He agreed that was a disadvantage. I had my bike loaded and ready to go. He went back to his room and went back to bed. I also went back to my room and laid down until the truck, the car behind me, or the car to the side of me moves out of the way. I set my alarm to 7:00 a.m. hoping something would break loose by then. 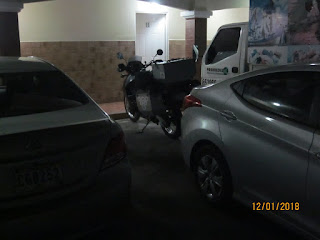 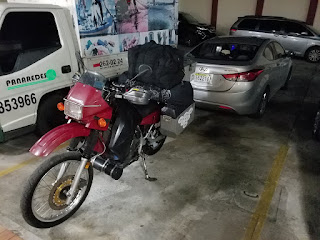 I awoke to the sound of a diesel engine. I stick my head out my door and the truck can’t get out, and he’s madder than a hornet. Finally, he gets after the office to find the dude blocking us in. It takes them 10 minutes to find the guy. In the meantime this truck driver is just fuming that he can’t get out. Eventually the guy shows up, moves his car and disappears really fast. The truck driver gets out and is now happy, and so am I. The Harley Rider show up again all dressed up in his Harley attire. We talk some more and I showed him my Harley-Davidson Cross Bones. He likes it. He then tells me it’s only a 5-hour drive to Panama City. He just rode it yesterday. He also said to watch out for the Policia, they’re everywhere. He also said it is a new four lane highway all the way to Santiago and old four lane from there to Panama City, Panama. I asked him what he does for a living and he said he was an architect and designed buildings. I told him I worked as a machinist for 37 years and was now retired. He said if I had time to spare I could stay with him for a while. I had to decline because I already had plans and I didn’t want to break them. We parted ways and I was headed toward Panama City. 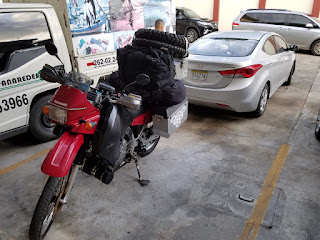 He was right about the road. It was all new and the road was straightened. In the next 124 Miles / 200 Kilometers I slowed down probably 10 times to 40 Mph / 65 Kph otherwise it was 50 / 55 Mph / 80 / 90 Kph. It was the best riding as far as making good time as I could remember. Man, that was an uneventful ride and it was great. I must point this out. Like the Harley Rider said, watch out for the policia. At the outskirts of every town they were there with their radar guns. Every officer had somebody pulled over. The speed limit was 31 Mph / 50 Kph through town and 50 Mph / 80 Kph on the highway. It’s Panamanian law.

There was a stretch where I encountered a car that was driving the exact speed limit. If it was 50 Kph he drove exactly 50 Kph. If it was 80 Kph he drove exactly 80 Kph. He was always behind me, alongside me or just in front of me. I just couldn’t shake the car. This went on for at 10+ Miles / 16 Kilometers.  It was a fancy car, with fancy chrome wheels like you see in the U.S. and totally blacked out windows. I saw my perfect excuse to lose him. A McDonalds popped up and I turned in to get something to eat. I was there for over 30 minutes and he was long gone. I hate when cars track on me like that. It happened to me in Russia.

While I was stopped, I also filled up with gas and decided I would make the run to Panama City. I was on the outskirts of the city by 3:00 p.m. and the traffic was moving nicely. I had Blanche navigating and she was sticking to the major highways. Eventually the traffic slow down to 25 Mph / 40 Kph and by the time I was within 4 Miles / 7 Kilometers of the Marriott hotel, it was stop and go traffic. I worked my way through the traffic as best I could, but the wide saddle bags don’t allow for that very well. Eventually, I reached an off-ramp to the hotel and Blanche took me to the door step. I thanked God I was through with that stop and go traffic mess.

I take my helmet off and the people in the lobby look at me like something the cat just dragged in. I go into reception and they looked at me strangely too. I was armed with my reservation number and showed it to them, which makes them happy. I get my room assignment and go upstairs to drop off my jacket and helmet. While was setting in the stop and go traffic, I was sweating profusely. I came back downstairs and caught all kinds of looks. My shirt was soaking wet from perspiration and so was my hair. I got myself a truck / cart and unloaded my bike. I pushed my baggage inside and people just stared at it. I must be a novelty to some people. I got my motorcycle covered and sent a Spot out into the universe. I have found of late my Spot device has become really finicky about having open sky to pick up a satellite. If there are any trees in the way it won’t find them. Anyway, I was ready to take a break from the madness of the traffic and the profuse sweating. I ate something and went to my room. I need to check on a sightseeing tour to the Panama Canal. I can do that tomorrow morning: I’m too tired tonight.
Posted by Beauty at 6:54 AM