7 January 2018 – Today was a travel day, so I packed up and checked out of the hotel. Jose cleared me out of the hotel parking lot with the security guard. I was off to the gas station to fill up. I was going to drive around San Jose with my programmed route. The cloverleaf I was to take had two loops closed to road construction and they were the ones I needed. Two kilometers down the road I made an illegal U-turn back to same cloverleaf and picked up Hwy 39 around the city. It was easy driving at 8:00 a.m. in the morning on a Sunday. I almost missed the exit because of lack of good signage, but I picked up Hwy 2, the PanAm highway. There were an untold number of bicycle riders on the shoulders. I also had to put on my rain suit for the first time. While I was stopped and putting it on, I met some other motorcycle riders. I gave them one of my blog cards so they can take a look at my blog. I got back on the road and in 1.25 Miles / 2 kilometers, the rain was gone. It sporadically came and went as I drove through the mountains. 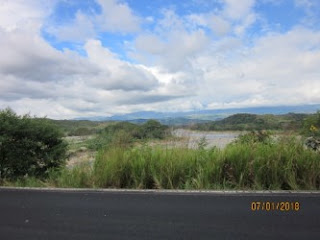 I eventually arrived at a city where the sun was out and it was too hot to wear the rain suit so I took it off, wrapped it up and put it back in my bag. I met a former Kawasaki dealer who moved to Costa Rica to live. He knew all about the Kawasaki KLR650, which I was riding, and told me what great bike it was. I gave him a blog card for both blogs. He said he thought he read my blog where I documented my trip around the world. We shook hands and he left. I finished packing up my motorcycle and took off. 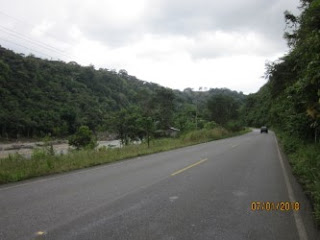 In 2 Miles / 3 Kilometers I was back in the rain, and this was serious rain. Rain drops the size of marbles. I was soaking wet. I broke Dave Reinhold’s rule of rain suits. Put them on before you’re in a rain storm. Now that I reminded myself of that rule, I won’t break it again. The rain eventually went away and I rode until I was dried out and happy again. I was within 20 miles of my stop for the day and guess what: another down pour. I was soaked again and the rain wasn’t going away. I was driving into Rio Claro and it was still raining right smartly.  To make it worse, the Police had an active check point working. They stopped me and wanted to see my driver’s license. I thought for sure he was going to ask me to pull out my paperwork in the rain. He has no idea what his name would have been if he would have asked for that. Since he didn’t and he was nice, I asked him for the best hotel in Rio Claro. He said, the Hotel Impala, so off I drove to find it. It was only down the road 300 yards / 300 meters. I checked in $35 / 20,000 Colons, and that was with hot water, air conditioning, a fan and Wi-Fi. I turned down the a/c to 17 Celsius and the fan to medium, to suck all the moisture out of my riding suit. I put on my riding jacket to sleep, along with two sheets and a towel over me keep warm. I slept really well.
Posted by Beauty at 6:40 AM